NANTUCKET, Mass. — President Joe Biden on Thursday wished Americans a happy and closer-to-normal Thanksgiving, the second celebrated in the shadow of the coronavirus pandemic, in remarks welcoming the resumption of holiday traditions by millions of U.S. families — including his own.

“As we give thanks for what we have, we also keep in our hearts those who have been lost and those who have lost so much,” the president said in a videotaped greeting recorded with first lady Jill Biden at the White House before their trip to Nantucket, Massachusetts, for the holiday.

On the island, the Bidens visited the Coast Guard station at Brant Point to meet with personnel there and virtually with U.S. service members from around the world. “I’m not joking when I say I’m thankful for these guys,” the president said when asked what he was thankful for, referring to the Coast Guard members standing ramrod straight before him on the grounds as he departed. 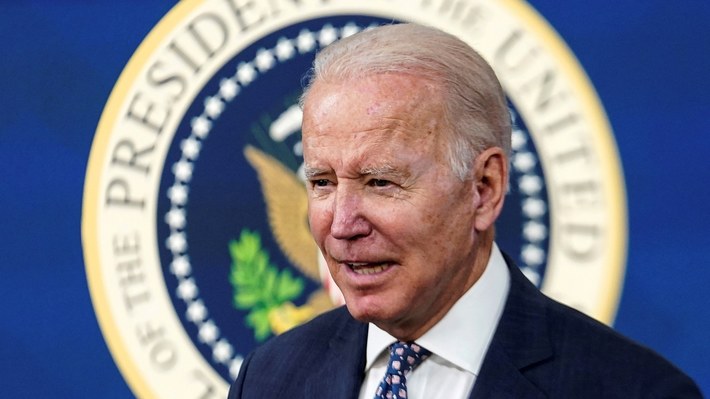 Reporters were kept out of the room for Biden’s virtual remarks, apparently because of tight space in the building. Well-wishers waved and cheered as Biden's motorcade navigated the island's narrow paved and cobblestone streets to and from the Coast Guard compound.

Biden, whose late son Beau was a major in the Delaware Army National Guard, said he has watched U.S. service members in action around the world, from the South China Sea and Iraq and Afghanistan to South America. He said when foreigners wonder what America is, “they don't see us here,” meaning civilians. “They see them,” he said of members of the Coast Guard and the other branches of the U.S. military. “It makes me proud.”

From Nantucket, the Bidens also called in to the Macy’s Thanksgiving Day Parade, briefly bantering on air with NBC broadcaster Al Roker. Shut out a year ago, spectators again lined the route in Manhattan as some 8,000 participants joined the parade. Parade employees and volunteers had to be vaccinated against COVID-19 and wear masks.

The extended first family went traditional for their Thanksgiving menu: roasted turkey, stuffing using a grandmother's recipe and other fixings. Dessert was three kinds of pie, and — in no surprise to those who followed Biden in and out of ice cream shops on the campaign trail — chocolate chip ice cream. Biden and his wife started spending Thanksgiving in Nantucket since before they were married in 1977 because they were looking for a way out of choosing whose family to spend it with. They did not visit in 2015 following Beau's death earlier that year from brain cancer at age 46, or in 2020, when the COVID-19 pandemic put the kibosh on big family gatherings.

Biden instead dined at home in Delaware last year with just his wife, daughter Ashley and her husband.

But this year, the president joined the millions of Americans who are celebrating the holiday with big groups of loved ones. Biden's entire family flew up with him Tuesday night on Air Force One to resume the Thanksgiving tradition: his wife; son Hunter and his wife, Melissa and their toddler son Beau; daughter Ashley; and grandchildren Naomi, Finnegan, Maisy, Natalie and young Hunter, as well as Naomi's fiance, Peter Neal.

The president has credited the roll-out of COVID-19 vaccines with helping ease the return of family gatherings this holiday season, although a resurgent virus has fueled an increase in new infections in the U.S. The president and first lady both have had their full vaccine dose, and a booster.

Naomi Biden and her fiance rode bicycles along on a local path just before her grandfather's SUV departed the secluded home where the family is staying. The sprawling compound is owned by David Rubenstein, a billionaire philanthropist and co-founder of the Carlyle Group private equity firm. Biden's visit, his first as president, is markedly different from his previous holidays here when he was a U.S. senator and later vice president. Then, he might have been seen walking around downtown.

Biden lost much of his freedom to move around on his own when he became president and now travels with a large group of security personnel, White House and other officials, and journalists. His every public move is closely watched by the U.S. Secret Service and other law enforcement.

“We're all going together,” she said of her family. The tree lighting ceremony is where Beau Biden proposed to his wife, Hallie, in 2001. They were wed on the island the following year.

Biden is expected to return to the White House on Sunday.

NEXT:Macy’s Thanksgiving parade returns, with all the trimmings