President Joe Biden has said that he is considering demolishing the elementary school in Uvalde, Texas, where 19 young children and two teachers were shot and killed last week in one of the worst mass shootings in US history. 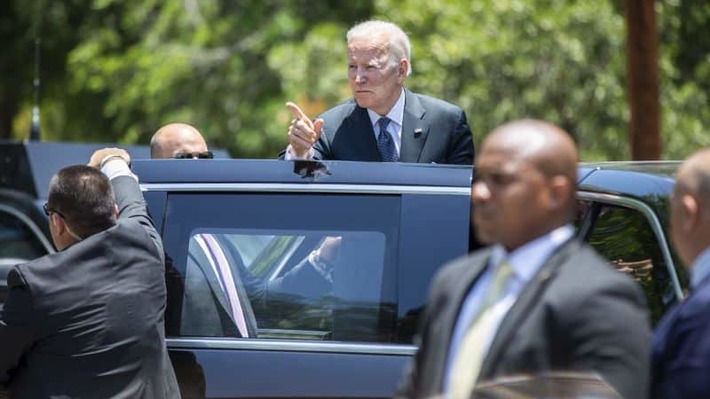 “He said, ‘I’m not going away. I’m going to bring you resources. We’re going to look to raze that school, build a new one,’” said the Democrat, who represents Uvalde.

“I can’t tell you how many little children that I’ve talked to that don’t want to go into that building. They’re just traumatized. They’re just destroyed.”

The president and First Lady Jill Biden visited the site of the massacre on Sunday where they spent time at a makeshift memorial set up for the 21 victims and lay a bouquet of white flowers.

Mr Biden wiped tears from his eyes as he looked at photographs of the murdered nine, 10 and 11-year-old children and two teachers.

Speaking to local lawmakers, Mr Biden also said that he was “looking to get real money for healthcare” for the grieving community members.

“This is a community that is going to need therapy. There is one psychiatrist in Uvalde, very few mental health therapists. We’re going to change that. It is a must,” said Mr Gutierrez.

The sites of mass shootings are often torn down as survivors struggle to return to the place of trauma while there are also concerns about such places attracting fanatics.

Sandy Hook Elementary School in Newtown, Connecticut, was demolished after 20 students aged six and seven years old and six staff members were shot and killed by 20-year-old gunman Adam Lanza back in 2012. A new $50m school was built on the same land.

The school district for Columbine High School in Colorado was also considering tearing down the building saying that the site had become “a macabre source of inspiration and motivation” for people with “a morbid fascination” for the 1999 mass shooting that left 12 students and one teacher dead.

Hundreds of people had sought to enter the campus in the years after the attack, including 18-year-old Sol Pais who travelled to Colorado from her home in Florida armed with a shotgun and ammunition in 2019, sending the school into lockdown.

However, the proposal to demolish the site was shelved in 2019 following mixed opinions from the local community.

During the president’s visit to Uvalde on Sunday, he was met by the desperate pleas of victims’ families who shouted “do something” as he left a midday mass at Sacred Heart Catholic Church.

Mr Biden promised: “We will.”

Just 10 days before the Uvalde massacre, a self-proclaimed white supremacis and racist shot dead 10 Black people and injured several others in a grocery store in Buffalo, New York.

Texas Governor Greg Abbott was met with boos and jeers as he joined the Bidens at the site of the massacre. 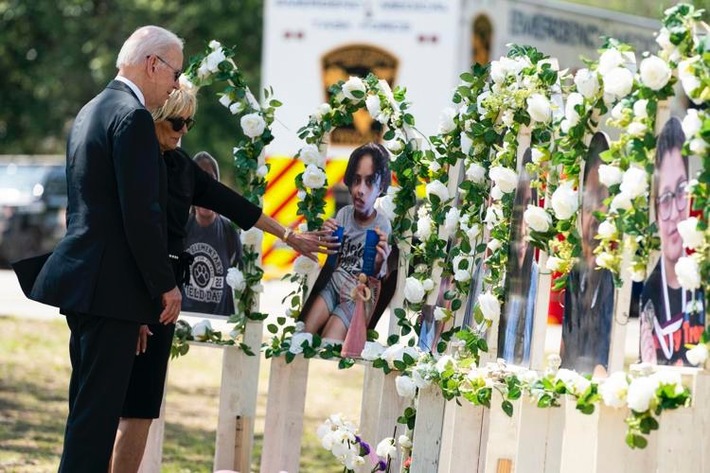 The Republican, who relaxed gun laws even further in the state last year, has come under fire in the aftermath of the shooting as pressure is building on lawmakers to introduce gun reform legislation and put an end to the surge in mass shootings devastating communities across the country.

While Mr Abbott cancelled his in-person speech at the NRA conference over the weekend, he still sent a pre-recorded message to the crowd where he continued to claim that gun laws don’t stop “madmen” from carrying out shootings.

Gunman Salvador Ramos legally bought two AR-15 rifles and 1,657 rounds of ammunition in the days after his 18th birthday on 16 May.

On 24 May he then shot his grandmother in the face before driving towards Robb Elementary School in the family’s truck.

He abandoned the vehicle in a ditch close to the school and entered the building through a door that was propped open.

Once inside, Ramos barricaded himself in a classroom where he shot dead 19 students and two teachers.

He was finally shot dead by Border Patrol agents after officials stormed the classroom.

The Justice Department has launched a probe into the handling of the situation after local officials admitted that critical mistakes were made.

Officers on the scene hung back, taking more than an hour to enter the barricaded classroom while gunshots continued to ring out and desperate children trapped inside called 911 begging for help. 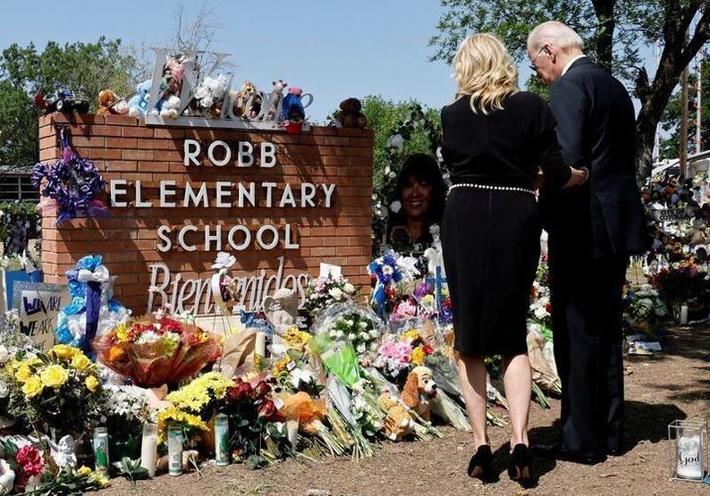 On the legislative front, Senate Judiciary Chairman Dick Durbin, an Illinois Democrat, said on CNN's "State of the Union" that he sensed a "different feeling" among GOP colleagues given the horror of the atrocity against young children in Texas. But he cautioned any eventual agreement will be limited.

And on the same show, Republican Rep. Dan Crenshaw of Texas underscored the limited opening for compromise in the GOP position. He rejected proposals such as universal background checks for gun purchases, red flag laws to keep guns away from people seen as a threat and prohibitions on people under the age of 21 buying powerful semi-automatic rifles. Like many Republicans, he called for enforcing school security. The level of weaponry, training and security needed would cost many millions of dollars in an often underfunded public education system and require kids to spend their formative years effectively under heavy guard. Crenshaw's arguments were symptomatic of the position that any gun control measures would be effectively un-American -- an outlook that weighs heavily against any effective action in Congress.

The cost of this absolutist philosophical stance, which leads to the widespread availability of deadly weapons and regular mass killings, was painfully revealed in a heart-rending interview conducted by CNN's Dana Bash with Adrian Alonzo, who spent all day Tuesday trying to find his niece, Ellie Garcia, only to discover she was among those who perished.

"By far the worst day of my life. And I'll never forget that day. I can replay those hours so vividly in my mind and it's just etched in my mind," Alonzo said.
Ellie would have turned 10 next Saturday.

Trump pivots from mourning to politics
While the President's power may be limited, he did his emotional duty and more Sunday, spending three hours with bereaved families on Sunday afternoon. At one point, with the first lady by his side, he poignantly embraced Mandy Gutierrez, the principal of Robb Elementary School, next to a growing pile of flowers at an impromptu memorial.

Ex-President Donald Trump made no such journey, choosing instead to cement his standing with GOP base voters at a time when his total control over his own movement is being questioned ahead of a possible 2024 White House campaign.

Trump appeared at the National Rifle Association-Institute for Legislative Action's annual leadership forum in Houston on Friday, less than 300 miles away from Uvalde, and read out the names of each of the children and teachers massacred.
"Each precious young soul that was taken is an incomprehensible loss," Trump said, but quickly pivoted to politics, lashing out at Biden and other Democrats for raising the issue of gun safety overhauls after massacres in Texas and earlier this month in Buffalo, New York, both of which were conducted by 18-year-olds with legally bought semi-automatic weapons.

He argued that it was not fair for law-abiding gun owners to be deprived of such weapons because of the actions of "sick and demonic" attackers. He proposed more guns in schools to keep kids safe and for the turning of school buildings into fortresses.

And Trump spelled out the argument that even small reforms are a ruse to confiscate Americans' guns, points often used by the NRA and other conservatives.

"Once they get the first step, they'll take the second step, the third, the fourth, and then you'll have a whole different look at the Second Amendment," Trump said.

The notion that even horrific carnage like that which unfolded last week in Texas must never diminish the magnitude of the freedom of Americans to own high-powered weapons of war resonates in red, more rural states usually represented by Republicans, where Trump remains highly popular. It also helps explains why even those GOP senators who might be willing to take modest steps to keep deadly weapons out of the hands of killers find it such a tough vote and why it's hard to meet the 60-vote threshold needed to pass major legislation -- a function of Senate rules that even some moderate Democrats are not willing to entertain changing.

One Republican who is shifting his position is Rep. Adam Kinzinger. The Illinois congressman said he was now open to a ban on AR-15 rifles following a flurry of mass shootings.

"Look, I have opposed a ban, you know, fairly recently. I think I'm open to a ban now. It's going to depend on what it looks like because there's a lot of nuances on what constitutes, you know, certain things," Kinzinger told CNN's Bash on "State of the Union" when asked if he still opposed "a ban on the kind of assault weapons that were used in the shooting."

Kinzinger, however, is hardly a representative sample of the GOP since he has freed himself from party orthodoxy by breaking with Trump -- including over his election fraud lies. He has decided not to run for reelection in the fall and is therefore no longer beholden to GOP activists who would consider his comment as heresy.

But the argument that any gun restrictions would unacceptably infringe the rights of law-abiding gun owners is inherently a political one. While the Constitution says that the right to bear arms shall not be infringed, it does not state that Americans have the right to have any weapon of their choice, especially those that fire at a rate of lethality that the founders could never have imagined. And the campaign against tightening gun laws prioritizes the rights of gun owners over those of innocent victims, like those in Texas who last week had the right to life destroyed in an instant.

So entrenched are these positions that the sense of helplessness in the face of repeated massacres seems unlikely to dissipate quickly. It's easy to imagine Biden and the first lady appearing at yet another vigil for victims of mass carnage soon. For the President, doing "something" might be impossible.